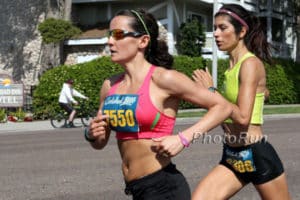 100 men have qualified for the 2016 Olympic marathon trials. 151 women have qualified. What do Colorado’s female trials qualifiers think about this disparity?  Colorado Runner chatted with some of these runners to learn their opinions.

The exact question posed to the below Olympic trials qualifiers was:

The 2012 trials had an even greater disparity with 85 men’s finishers and 152 women’s finishers. As a female qualifier, what do you think about that? The men’s cutoff is 2:18 and the women’s 2:43. Should the women’s time be lowered, the men’s increased, or both left alone?

I don’t feel like the standards may necessarily be “equal,” however, I also feel the women are running faster consistently since 2012. The men have struggled with running faster times in the marathon it seems. Not why this is happening and not sure if changing the times would help or not. I guess I could see tightening the women’s standards more, both “A” &”B,” but only believe this would create similar numbers, not necessarily a fair change.

As a woman who trains with a male that is trying hard to do everything he needs to get the OTQ, we’ve had many discussions about it. I love that the women’s time of 2:43 gives so many amazing women the opportunity to realize a big dream of running in the trials! I’ve heard a lot of people say there are too many women, but I personally think it’s great! I was one of the women who could “only” make the B standard in 2012 and to this day that race has given me my drive. As a mom who had no idea what I was getting into, the trials were the biggest highlight I could imagine! I think giving more people that opportunity is great!

So yes I think we should give more men that opportunity. I don’t really follow men’s time as much as women’s, so I couldn’t say it needed to be lowered to any certain number but I do think the men’s times seem a lot more strict. It would be great for more men to have the opportunity to experience the Olympic trials!

I think it’s awesome that there are so many women running so fast! But, as we become stronger I eventually think the time needs to be adjusted accordingly. On the plus side the more runners creates more spectators, opportunity, and excitment

As your numbers point out, it is fairly obvious that the men’s standards are harder than the women’s. I do believe that the women’s standards should be lowered. I think it’s great that so many women are able to achieve the standards and be able to secure a spot at the trials, however, if we’re really looking for equality between genders, then women’s qualifiers should reflect the men’s qualifiers. Even looking at the ranges, the women’s B standard is about 16 minutes off of what it took to make the Olympic team in 2012, while the men’s B standard is 9 minutes slower than the 2012 Olympic team’s time. I’m very new to the marathoning world, so I feel like I’m not the most qualified to answer, but in my brief experience, I’ve known men, who are talented and work very hard to only miss the B standard by seconds, and the same level of talent as a woman easily hits the B standard.

Overall, again in my brief experience, it is harder for men to make the trials, and I side on making the women’s standards harder. I think that not only will it even the fields number wise, but it’ll make the Olympic trials a more prestigious event and more respected on the women’s side

I think the obvious reason that the men’s standard is harder is that traditionally there have been more elite level men running the marathon with the competition being higher versus the women’s. Women’s marathoning as a sport is just a good deal younger than men’s. I think the reason for having “easier” standards the last several Olympic trials has been to encourage participation and foster an urge in American women to go for the marathon.

That being said, US women’s marathoning has experienced HUGE growth in the last 4-5 years, especially the last 2 or 3. As more and more women are running faster, the standard should naturally follow suit. In my opinion, more attention should be paid to the disparity between the A standard and the B standard for the women as compared with the men.

The women’s marathoning revolution that has taken place in the US is amazing to watch and be a part of, but the number of women qualifiers versus men’s qualifiers speaks for itself. A more “fair” system should be in place so that both men and women athletes have equal opportunity.

I think the Half Marathon should NOT count as a marathon qualifier. The marathon is far different than the half. I think the women’s B is too soft, it should be lowered to 2:39:00. I think the “A” standard should now be 2:33:00.

I believe the USATF‘s approach of adjusting the qualifying times over the last few cycles continues to drive towards, what I assume, is an equivalent level of difficulty. It will always be an iterative process to hit a moving target, but I believe the goal should always be to have shoot for equality and celebrate how the results play out.

With such a big disparity in the qualifying numbers between men and women, I think something needs to be done to provide a greater equalizer. So yes, I think that either the women’s standard should be lowered or the men’s standard increased. I’m a little torn on which would be the better solution for equalizing however.

Here’s what it comes down to: what type of event do we want the US Olympic Trials to be and how many participants in a marathon race make it a strong race, where the cream of the American crop rises to the top? What field size is optimal to marathoning? Is there an optimal field size?

Everyone knows that the marathon is a unique event for trials in that it can easily afford more bodies than the other running events. An eight-lane track can only hold so many without the sheer number of people impeding the actual function of the event – to run fast and to allow our nation’s best to put themselves in the position to make a team.

Has American women’s marathoning been steadily improving? That could very well be argued, and makes me think of the thoughts and facts spelled out in this article, written in November. Regardless, if two Olympic cycles, a total of 8 years of marathoning in the US, both dictate that the standard for this event in particular seems to favor one gender over the other, we should adjust in response to that.

So, my answer is not necessarily black and white, yet more of a question to the type of event that the US Olympic Marathon Trials should be. What is the optimal field size for a marathon?

It is fantastic to see the depth of the sport, especially ton the women’s side. I think it is a great way to support up and coming runners that aren’t quite at the A level standard, yet are at an elite level and looking for an opportunity to compete. I think that 150 is an acceptable number for the trials, since it is a marathon and there is no need to worry much about jostling and getting out to the front hard from the start. If the number of qualifiers got much larger than that, I think it might be a good idea to reconsider the qualifying time and think about lowering it slightly, as the Olympic Trials should be a select number of individuals.

Past winners return to the top at pikes peak marathon